Integrate Zendesk and Dynamics CRM using a combination of bulk and scheduled processes to keep your Dynamics CRM and Zendesk data in sync.  The templates are a two-way integration solution, allowing data to flow in both directions between the two systems. Decide which components of each system should be synced with the other using the provided integration maps. The integration includes processes that will sync up the following record types:

The maps can be used as downloaded, as a starting point to customize further, or by showing techniques on how to get SmartConnect to interact with Zendesk.  The maps make use of several key Zendesk features such as:

The solution includes a set of minor customizations to both 365 Sales and Zendesk. The customizations allow the unique ID from each system to be stored in the other one in order to ensure that data isn’t duplicated or missed when integrating the two systems together.

The Zendesk and Dynamics CRM templates consist of 18 maps.  There are integration points between the following points:

For every integration, a bulk version and change/real-time version of the maps exist going from CRM to Zendesk as well as from Zendesk to CRM.  The set of bulk maps are intended for an initial sync of data. Once that is complete, the change maps are designed to be scheduled as an ongoing process to keep the two systems synced up.  Bulk maps integrating data from Zendesk into CRM have two maps linked together to complete the integration (MapID’s that end in ‘2’).  This is because the Zendesk API only returns 100 records at a time.  Running one map will automatically run the linked map if another page of data exists, allowing for any number of records to be exported from Zendesk.

Any of the mappings can be changed or configured once the integrations are imported into SmartConnect, so additional fields can be included or even new maps can be added to fit specific needs.

Prerequisites to using these templates are as follows:

The process to integrating a Zendesk and CRM system is

Zendesk and CRM use different fields to identify each record.  For example, Zendesk tickets use a number as the unique identifier but CRM’s caseID has letters and numbers.  Because of this, we need to add a caseID field into Zendesk and a ticket number into CRM so duplicates aren’t created and changes made in one system will be reflected in the corresponding case/ticket in the other system.

Because Zendesk tickets use a number as the unique identifier but CRM’s caseID has letters and numbers, we need to add a caseID field into Zendesk.

Import and customize the Connector methods

The REST settings define how SmartConnect makes calls to the Zendesk API. After the methods are imported, the authorization key needs to be imported and several constants need to be set before any successful API calls can be made. 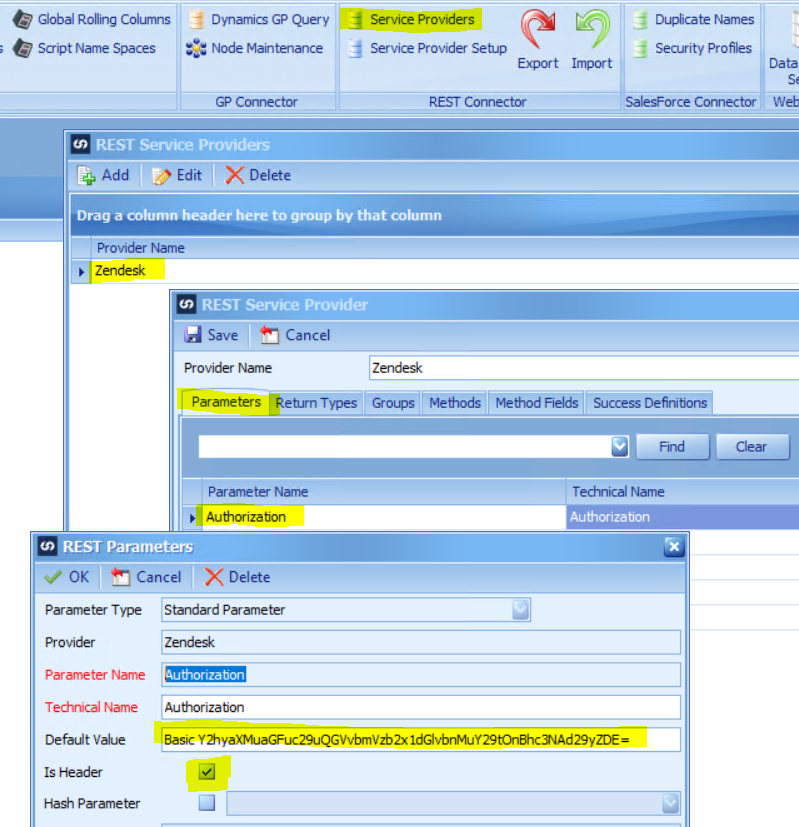 Postman is a tool that that can be used to test web services by making (and saving) web requests. Postman can be installed by browsing to https://www.getPostman.com/apps.

Importing the maps and configuring the saved SQL connection is the last step to set up. Note that there are bulk maps and real-time/change maps going both ways, so not all maps will be used.  The MSSQL Server connector is used in pre-map tasks to update different parameter values, such as the pageNum and unix_time variables.  The ODBC Data Source is used in the “ZENDESK_CUSTOM_FIELDS” map.

The maps can be grouped by the end points they integrate together (excluding the “Zendesk Custom Fields” map that runs one time). Each set has bulk maps and change/real-time versions. Bulk maps going from Zendesk to CRM have two maps that reference each other. The map pair allows sending more than 100 records. The “CHANGE_” maps send data from Zendesk to CRM and are intended to be scheduled to run as often as every 5 minutes. All real-time maps send data from CRM into Zendesk and begin with “RT_” in the mapID.

A general description of the map types are listed below.  For the initial setup, the maps should be run in the following order:

After the bulk maps have been run, the real-time and change maps can be ran.

Join us for a Demo